The following piece comes from Eddie Parry, an associate at a ‘Big 4’ firm. He is an avid reader of the works of Malcolm Gladwell & Mathew Syed, with much of their work focusing on the ‘hidden’ causes of things. Thus, he has a produced a blog of similar ilk, analysing the concept of confirmation bias. It is a truly fascinating read! LW

Recently I listened to a discussion between my sister and my grandad about Winston Churchill. A divisive figure and, depending on your opinion, a national hero or painful reminder of Britain’s troubled past. I noticed that after fifteen minutes of good-natured debate the conversation moved on. Both made convincing arguments based largely on fact, however neither succeeded in winning the other over to their view and seemingly left surer of their opinion. I am sure this type of debate is familiar to everyone. Regardless of how sound the logic, how irrefutable you think your evidence is, you will not be able to change anyone’s mind during an argument.  It has left me disillusioned with the practice of argument and debate because, in my experience, the most common outcome is both parties leaving more adamant of their views, with an increased gulf between the two parties. This has left me wondering, why don’t we change our mind?

To understand why this is so common, we must first understand why we are unlikely to change our mind. To do this I am going to repurpose a classic psychology study originally carried out in 1960 by Peter Wason. To explain the study, I have written a very crude experiment that is much like Wason’s, using YOU as the participant.

Below is a collection of eight ‘triplets’ (sets of three numbers). There is a pattern linking the numbers. Your task is to identify the pattern.

Wason found that when participants were given sequences similar to the ones above, they often identified a complicated hypothesis for the relationship between the triplets when the only relationship was that the numbers were all ascending. In my example, all triplets obeyed the pattern of increasing by two except the seventh triplet – I will refer to this as the ‘two interval’ hypothesis. You could be forgiven for overlooking this and only paying attention to the triplets that support the two interval hypothesis. It is an exceptionally common human behaviour known as confirmation bias.

You may be wondering what all this has to do with my family rarely changing their mind. Confirmation bias applies to any opinion we hold. When we develop an opinion, we will naturally seek information that supports that opinion. When we are constantly surrounded by people that agree with us, we are bound to become more convinced of our beliefs because we are constantly seeing information that supports our belief. Think for a second, how many people do you follow on Twitter that completely disagree with you about something you care about? How many liberals followed Katie Hopkins? How many conservatives follow Alexandria Ocasio-Cortez? Even when we see information that contests our view it is easy to discount amongst the sea of information that supports our opinion. Just as it easy to discount the 7th triplet amongst the 7 others that support the two-interval hypothesis. Confirmation bias can explain how our opinions are nurtured based off the information and opinions we commonly encounter. 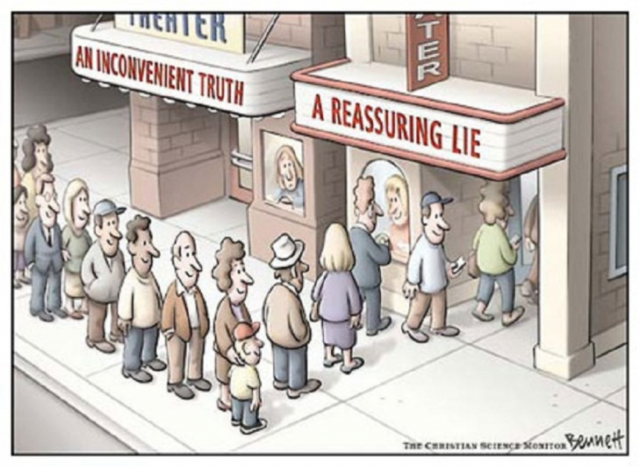 Confirmation bias is important, but it is not the full story. We must now consider why we are averse to changing our mind when confronted with facts that seemingly disprove our opinion. For example, you could not convince a flat-earther the world is round by showing them photos from satellites or explaining the underlying Physics that overwhelmingly suggests that the Earth is an oblate spheroid (slightly squashed sphere to you and me). This phenomenon is linked to Cognitive Dissonance. A definition of cognitive dissonance is ‘The mental discomfort experienced by a person who simultaneously holds two or more contradictory beliefs, ideas or values. The discomfort is triggered by a situation in which a person’s belief clashes with new evidence introduced to that person.’

Essentially, this means it is easier to ignore new evidence contrary to your current belief than to have internal conflict that would be caused by accepting a new, contradictory belief. For example, one cannot simultaneously believe ‘flat Earth theory’ and Isaac Newton’s understanding of gravity. Imagine the trauma someone would experience when relinquishing an opinion they have held for many years. It is hardly surprising this type of debate often ends fiercely.

These two principles help us to contextualise the debate between my sister and grandad if we consider their relationships with Churchill. My sister has grown up in an era where the horrors of WWII are something we learn about in school and have enough separation from to consider it all behind us. This is a luxury many of our grandparents did not have. They spent their formative years with the constant threat of the fall of Western civilisation, something unthinkable to our generation, and living with press censorship. Imagine the cognitive dissonance caused by assimilating information that calls in to question the actions of the Prime Minister responsible for saving your country from annihilation. Equally, imagine the wave of confirmation bias you could ride with the media subjectivity of the day. It is therefore in no way surprising to me that one generation remembers Churchill the war hero and the other Churchill the tyrant when we consider the pool of information they had access to.

When we gain an appreciation of confirmation bias and cognitive dissonance, we are admittedly scratching the surface of a complex field of psychology and I must point out that I am very much an armchair expert. However, I hope it helps us to appreciate the struggles we face when trying to change someone’s mind about a deeply ingrained opinion and hopefully be more understanding of other’s opinions when trying to change them.

Voltaire summarised the contents of this blog nicely. ‘The human brain is a complex organ with the wonderful power of enabling man to find reasons for continuing to believe whatever it is that he wants to believe’.